For seven years I ran an annual BBQ to which I invited everyone I knew in the entire world.  Because this contained a lot of computer antivirus people, I called this party the Annual Virus Geeks’ Barbecue. (three years ago Pat Bitton objected to the American parlance of eponyming Barbecue as BBQ, but then Ms Bitton is English–nb, I got her objection cockeyed, and have corrected other things in this post at her suggestion, thanks Pat!)

Above this you see a group of my friends from school who together performed at the Renaissance Faire and today are architects, programmers, college professors and other notable things. We once went by the name PHANTASMAGORIA and our motto was “We’re more trouble than we’re worth!” 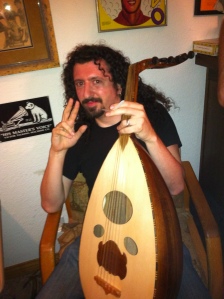 This is famous magician Andrew Goldenhersh playing my Oud.

At one VGBBQ we had a specially made game of CLUE where you would match the virus, the virus expert and the infected company. (I still have two dozen sets of cards for anyone interested in this item) We always have a SCRABBLE competition.

Like most parties, there are various groups of people here are Jordan and Meredith, Paula Trocone, her sister, and Dirk Chapman. Two of these people worked for various AV companies.

This is my brother John, and the infamous James Dennis. John was a doctoral candidate at UCLA where his business card read. “Rock Star and AI Hacker” Jim Dennis worked at a clutch of av companies (as did I) but escaped his virus problems by switching to Linux. Worked pretty well as it turns out.

That’s Meredith Levine looking off left, and Andi Lee and his date on the right. Andi is the CEO of ESET corporation 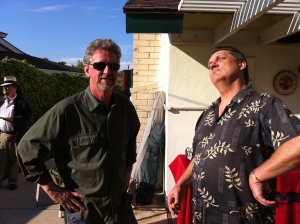 Believe it or not, these two guys were once associated with an infamous group of computer hackers, but I am sure they have learned their lessons by now.

There isn’t a VGBBQ this year, but there still might be one in the future…  I will probably post some more photos.

3 thoughts on “The Virus Geeks’ BBQ—not this year…”